Germany is the ancestral homeland of Riesling. The grape is grown throughout the country and delivers wonderfully expressive and varied selections of Riesling. Historically the Mosel, Rheingau and Rheinhessen are the most important regions, with notable wines also grown in Pfalz and Nahe. Germany grows 45% of all Riesling and is the largest Riesling producer in the world. Mosel The Mosel produces the best sweet wines, and is portrayed as the benchmark of quality. Mosel wines tend to be delicate, lower in alcohol, higher in acid, floral and intensely mineral. They are usually made in an off-dry style, owing to their elevated acidity. This is the Riesling region, with 66% of its total acreage being dedicated to Riesling. The Mosel is commonly planted on steep, south-facing hillsides of high planting density along the Mosel River. Soils are mostly composed of slate though volcanic rocks can be found. The best vineyards are often Erste Lage from VDP producers. Classic producers include Dr. Loosen, Markus Molitor, Selbach-Oster, J.J. Prüm, Dr. Thanisch and Von Schubert (Maximin Grünhaus), among many others. Rheingau Riesling is the dominant planting in the Rheingau and considered by some as the traditional home of the grape. Many wines are made in the dry style and are rich and full-bodied. There is usually a pronounced acidity and spiciness to the wines and often a characteristic Kirsch or cherry fragrance. This is the home of the Kloster Eberbach, Schloss Johannisberg and the famous Geisenheim winemaking school. Nahe The Nahe River flows parallel to the Mosel and is a tributary of the Rhine River. This was traditionally a very important Riesling region, and produces excellent dry Riesling. Top producers include Schlossgut Diel and Weingut Dönnhoff. Rheinhessen This is Germany’s largest wine region by acreage. Wines tend to be softer, lower in acidity, fragrant and medium-bodied. Rheinhessen is home of the infamous Liebfraumilch and is mostly known for its Trocken wines. Pfalz (Palatinate) The Pfalz region is known for its brilliant dry Rieslings, as well as for its spicy Spätlesen and Auslesen. There is a clone of Riesling (Clone 90) unique to the Pfalz, developed at the Neustadt Research Institute, which is believed to be responsible for Pfalz wines’ unique spicy character. Pfalz is the home of the Weinstrasse (famous wine road). Classic producers include Müller-Catoir and Bürklin-Wolf. Other German Riesling-producing regions include Baden, Württemberg and Franken. 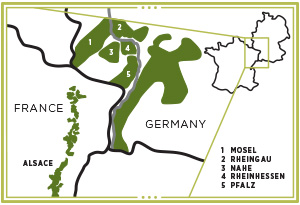 Alsace is the only A.O.P. in France allowed to grow Riesling grapes. The region, on the west side of the Rhine River, is very rich in diverse terroirs and consists of alluvial-based soils in the plain to calcareous, marl or sandstone on the hills. Fifty-one Grand Cru vineyards are scattered along the 70-mile-long region. Alsatian Riesling wines are often made in a dry style. They are also made in a riper style with vendanges tardives (sweet or dry picked at a minimum potential alcohol of 14%) and Selection de Grains Nobles (Botryitized picked at a minimum potential alcohol of 16.4%). Alsatian vignerons prefer to produce wines of higher alcohol content, normally around 13% (there's a legal minimum of 11% alcohol for the Riesling wines in Alsace). Classic producers include Marcel Deiss, Hugel et Fils, Josmeyer, Albert Mann, Ostertag, Schlumberger, F.E. Trimbach, Weinbach and Zind Humbrecht. Interestingly, the wine laws in Alsace are mostly German. Alsace has been French territory since 1648 (when the Treaty of Westphalia ended the Thirty Years' War), though it reverted back to Germany from 1870 to 1918, and then again from 1939 to 1944. Riesling is on record as being planted in the Alsace region since 1477 when its quality was praised by the Duke of Lorraine. Today over a fifth of Alsace’s vineyards are covered with Riesling vines, mostly in the Haut-Rhin district.

Riesling is widely produced across the West Coast and in select areas of New York, Michigan and Canada. Because the climates, geographies and soils of these regions are so vastly diverse, North America produces a panoply of Riesling styles. In the late nineteenth century German immigrants brought with them Riesling vines, named Johannisberg Riesling. New York, particularly the Finger Lakes region, was one of the earliest U.S. producers of Riesling. Plantings first appeared in California by 1857 and followed by Washington in 1871. Washington 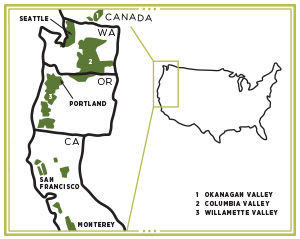 In Washington, Riesling is experiencing nothing short of a boom. Most of the Riesling acreage is grown in the rain shadow of the Cascade Range on the east side of the state within the Columbia Valley appellation. One particularity of the viticulture in this region is the absence of rootstocks. Washington is the largest Riesling producer in the United States. Classic soils of the Columbia Valley of Washington are wind-blown loess on the top of granitic deposits from the Missoula floods sitting above the basalt bedrock. The wines are usually ripe, often slightly sweet (though not necessarily so), with notes of peach and expressing excellent minerality. Classic producers are Chateau Ste.Michelle/Eroica, Pacific Rim, Kung Fu Girl, Poet’s Leap. Oregon Oregon has a small tradition of Riesling. There the vineyards lie mainly on the western side of the Cascades where rainfall is abundant. Oregon Riesling grapes preserve great acidity, and often the time for picking is critical due to the threat of early Fall rains. Try Chehalem, Trisaetum and Brooks wines. California California’s Riesling plantings are located in cooler areas around Mendocino, Monterey and Santa Barbara counties. Depending on the climate, California Riesling can be soft and full-bodied, sometimes lacking acidity. In California, Riesling lags far behind in popularity to Chardonnay and is not as commonly planted. A notable exception is the growing development of high-quality Late Harvest dessert wines. Look for Smith Madrone and Trefethen. New York New York Riesling finds a varied expression in upstate New York where it is often grown to produce notable ice wine. New York Rieslings are typically produced in a drier style and have a characteristic effervescent light body with a similarly light, mellow flavor. The industry is concentrated around four lakes (from east to west): Cayuga, Seneca, Keuka and Canandaigua. This is an historically rich region from the first wineries in the 1860s to the glorious years of Dr. Konstantin Frank and Charles Fournier. Canada In Ontario, Riesling is commonly used for ice wine, where the wine is notable for its breadth and complexity. The climate of the region is typically quite warm in the summertime, which adds a layer of richness in the wines. Ontario is a major producer of ice wine (legally, the grapes need to be frozen on the vine), with production volumes nearly equal to those of Germany. Late Harvest wines and some sparkling wines are produced from Riesling in Ontario, but it is dry to off-dry table wines which hold the largest share of production. In British Columbia, Riesling is commonly grown for use in ice wine, table wine, and Sekt-style sparkling wines. The Okanagan has a growing season similar to Washington’s with long summer days and cool nights. Michigan 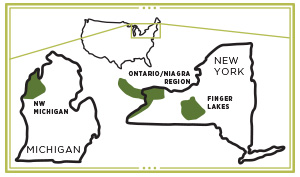 Michigan contains four AVAs known for the production of quality wines including Fennville, Lake Michigan Shore, Leelanau Peninsula, and Old Mission Peninsula. All four of these regions are located in proximity to Lake Michigan, and almost all of Michigan’s wine grapes are grown within 25 miles of the lake. The lake effect provides a favorable microclimate compared to interior regions of the state. Chateau Grand Traverse is a classic producer in this region.

The warmer Australian climate produces thicker skinned grapes, sometimes seven times the thickness of German-grown grapes. Australian Rieslings are noted for their oily texture and lime fruit flavors in their youth and a smooth balance of freshness and acid as they age. Riesling producing regions are largely found in South Australia, Western Australia, Victoria and Tasmania. In 1838, William Macarthur planted Riesling vines near Penrith in New South Wales. Riesling was the most planted white grape in Australia until the early 1990s when Chardonnay greatly increased in popularity. Riesling still flourishes in the Clare Valley, in particular the areas of Watervale and around the Polish Hill River, and the cooler Eden Valley where some sparkling Riesling is produced. Some fine Rieslings are produced in Western Australia (Frankland Estate, Leeuwin Estates), Tasmania (Tamar Ridge) and the Clare Valley (Grosset). New Zealand Riesling wines tend to be lighter and more delicate than their Australian neighbors due to the cooler climate. They are made from dry to sweet with the best examples coming from Marlborough and the more continental Central Otago.

Austria has relatively small plantings but Riesling is the second leading white grape variety after the indigenous Grüner Veltliner. Wines are mostly made in the dry style and known for being clean, direct, rich and palate-coating with a particularly strong mineral aspect. A particular Austrian Riesling trademark is a long finish that includes hints of white pepper. With alcohol levels normally around 13%, Austrian Riesling has a relatively high alcohol content and is generally at its peak after 5 years. Main Riesling producing regions include Wachau, Kamptal and Kremstal.